This blog post is a continuation from Part I and Part II.

Origins of a Field Trip

But what about the site’s history before heavy industry took hold of the coasts along Burrard Inlet?

The early 1900s saw some of the most pronounced colonial activity on the North Shore. This period was marked by early forestry activities that razed the coastal slopes and bluffs of the immense stands of Douglas fir, hemlock and cedar that once soared all along the BC Pacific coast.

This great cut was a once in a thousand year cull. While this seems extreme to modern thinking, back then, it likely really did appear to the early settlers that the forests went on forever, providing an endless bounty for the taking.

Unfortunately, they were wrong.

Though forests can be harvested sustainably, the clear-cutting methods used by the early colonialists, and by the timber industry for decades after that, has led to losses on many levels. Ecological loss includes: erosion and associated soil degradation, adverse effects on streams likely used for spawning salmon and other aquatic life, terrestrial habitat loss, and the loss of who knows how many plants and animal species.

Culturally, this great cull was a loss as well. Without travelling to places with some of the remaining stands of old growth forests, people in my father’s generation, my generation and my daughters generation–and for several generations to come–have been deprived of knowing what it would be like to live alongside these majestic forests that once formed a solid ribbon along the Pacific Coast. As I write this I am reminded of the stumps of these early giants that my colonial forefathers razed that one often comes across while hiking along the North Shore mountain trails. And when I think about this I feel this as well as a loss. Personally. Emotionally.

And there, for me is a mindful indicator. When something triggers an emotional response, be it positive, or like this one, negative, it says, “Hey, pay attention to me. Do you know where I’m coming from.” And to me that is part of the long and winding road of mindful practice. Once you’ve gone through practicing clearing your mind, and dealing with a lot of issues you find there in the first place, there’s this ongoing journey of discovery of self-discovery. And part of that process, it stopping once you find something that triggers an emotional response to see whether you’re owning it.

Having lived in the forest in central BC for a time as a child, I spent large chunks of time in solitude with trees. Never any as majestic as were on the coast (and if I think about it, maybe the forest where I lived in near Cariboo Lake had also been logged), but tree enough for me. But the trees were just the start of it. I saw moose, black bears, and thin snakes that flashed like silver through mossy rocks in the stream by our place. I could set my watch by a beaver who swam by daily in the lake. Porcupines. And ever so many birds. I never saw a grizzly bear. About that, I was glad.

Once the forest companies were done, industry moved in along the coast, and that’s when the area of the flats was taken over by industrial activity. There is a black and white archival shot of the site of the mudflats in 1950 when it was Deeks and McBride Sand and Gravel Company on p. 8 of this paper done by John Barlow (towards an ecological restoration degree). If you want to know why the site was called a ‘brownfield’ site after this time, that photo will give you a clear idea.

Of Artists and Squatters

From about the 1920’s on, in areas that were abandoned or overgrown, an unconventional community grew up along Burrard Inlet in this area, made up of squatters, artists, and people avoiding the war. They built ramshackle and stilt houses along the beaches, and made a life. Among the people who lived along Burrard Inlet during this time, was Malcolm Lowry, the colourful British author who wrote the novel, Under The Volcano

, which is listed as the 11th top English novel of the 20th century. The manuscript was nearly lost to a fire of their squatters house near Dollarton, rescued by his wife, while many of his other writings went up in the blaze.

Lowry’s home was not the only squatter’s cabin along Burrard inlet to go up in smoke. The other homes along the Maplewood Flat area, largely wooden, like the one below, were set ablaze in the early 1970’s when the City of North Vancouver forcibly evicted the residents, as detailed in a photo news story from the Vancouver Sun.

Residents Joyce and Peter Williams of Maplewood Mudflats in North Vancouver on the last day before they are forced out on March 27, 1973. Photograph by: Dan Scott, Vancouver Sun. Click for source.

There is still a memento left at the site to the alternative inhabitants of the flats who were turned out in the form of miniature wooden houses. 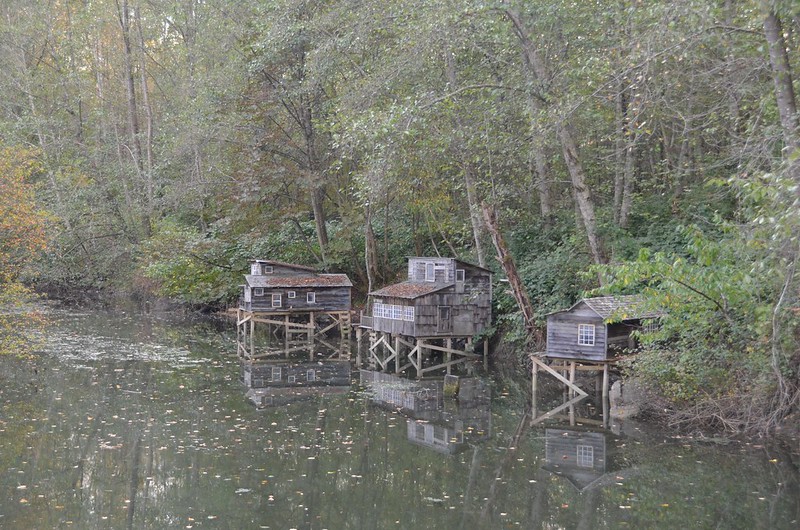 These days, the mudflats lie largely silent of human drama. People using the park are expected to stay on the trails to not damage its sensitive ecosystems, which meant I would not be doing digging into the mudflats. So to get ready, I just got together my camera, binoculars, some boots, bug spray, and notebooks. Backpack. Check.

Next thing I knew I was on my way. Below some of the scenes I captured of the sights along the way. Based on the views and the serenity, you would hardly know that it was ever any different.

A green Pacific Chorus Frog catching some afternoon sun in the brambles. 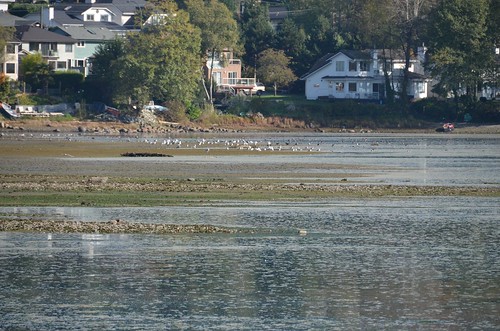 The view from the beach of the Maplewood Mudflats. 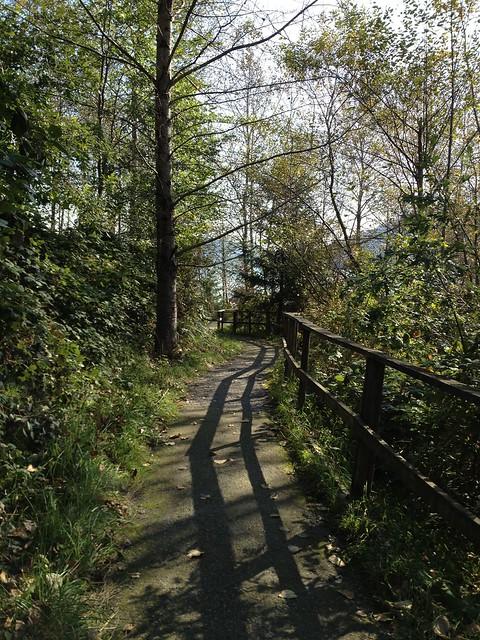 Woodland trail at Maplewood Mudflats beckons to be walked.

This blog post is a continuation from Part I.

Origins of a Field Trip

For a course in sustainability I took last semester, one of my assignments involved a wetland field trip. We could pick any aquatic system, so I visited Burns Bog first, as this is the most famous bog in BC’s lower mainland. After a bit of trekking around, and being frankly bummed out about the highway being so close, I decided to choose a place closer to home and a bit further from the beaten path (or so I thought).

A wildlife biologist friend of mine at work suggested I check out the Maplewood Flats Conservation Area, which is a little park in North Vancouver along Burrard Inlet. Located just east of the Second Narrows Bridge, Maplewood Flats supports great views and many trails, but not many people outside of local residents and birding enthusiasts know about it. I had not even heard about it myself, but when I went there on a Sunday evening (October 6, 2013) to see if it was a good fit, I saw the sight in the picture below and knew this was the patch of mud for me.

I found out that I could plan my field trip to correspond to the timing of a nature walk hosted by Al Green, of the Wild Bird Trust (WBT). Every second Saturday of every month they lead a free interpretive guided walk through the park. (Yes – free! They also host free 8 am birding walks once a month that you can find out more info on at the WBT link above.)

But before I headed out to the field, I needed to do my homework.

Field Prep: Digging into the History

A good field trip starts with a solid desk study. Though there isn’t a lot of material easily available on the history of the Maplewood mudflats, once I got started, the research trail led me down a rather long rabbit hole into a past that I didn’t fully expect.

Maplewood Flats is the largest intertidal estuarine marshland on the North Shore, and all that’s left of a wetland system that once pretty much circled Burrard Inlet. The casual user of the trails through the 75 acre park would not guess that the all the lovely trees and vegetation are actually the result of the reclamation of an old brownfield site that is still undergoing restoration.

We in Vancouver are used to thinking of Burrard Inlet as home to some substantive industry and shipping routes due to the Inlet hosting the many trade activities of the Port of Vancouver. All the industrial effluent discharge and shipping activity in the Inlet has also led to poor water quality that is of concern due to, among other things, high PCBs in sediment in many areas, which thankfully seem to be declining. The pictures below show some of the current urban settlement and industrial activity around the Inlet.

Urban development to the east of Maplewood Flats.

But it wasn’t always this way.

Before European settlers came to the North Shore—bringing their industries with them—the Tsleil-Waututh, trans. “People of the Inlet”, inhabited the area that is now home to the mudflats.  The Tsleil-Waututh, who are also part of the wolf clan, are one of many different groups of Coast Salish peoples who first inhabited the Pacific Northwest. Some people may recall their symbolic wolf logo to the left, which was prominent at the last 2010 Vancouver Winter Olympics.

I have a small percentage of First Nation ancestry mingling with my largely English, French and Scottish heritage (my Aboriginal background is alleged to a great-great-great-great (and so on) grandmother way back on my mother’s French side in a time that’s shrouded in family mystery); however, I wouldn’t consider myself qualified to say too much about the history of the Tsleil-Waututh and their lands around Maplewood Flats. So I would encourage you to click the links above and below to learn more from the band itself about their history and vision of where they are headed.

The forward thinking Chief of the Tsleil-Waututh is now Justin George. Chief George’s grandfather was the Canadian icon, Chief Dan George – check out this CBC footage of him and Dustin Hoffman from 1971, and his moving Canada Day speech to the nation in 1967.  Justin George’s father, Chief Leonard George, is also locally well known for seeing some challenging projects to fruition, like the Raven Woods development, which has helped  bring positive transformation to their band.

A map of the Consultation Area of the Tsleil-Watuth shows their asserted territory running as far as Langley in the southeast to Alice Lake and Garibaldi up past Squamish in the northwest. During the time when the band traveled freely across these lands, they had a saying, “When the tide went out, the table was set.”

A clam shell, some green algae and driftwood at the mudflats.

The Maplewood mudflats were once one of the many coastal wetland systems that were hosts to a veritable marine feast. Sadly, this is no longer the case. An overall gradual decline in the abundance of species, as well as toxicity factors leading to food safety issues of seafood in Burrard Inlet in general has meant the flats have closed shop for human consumption. The frequently posted harvesting prohibition warning signs (such as the one I saw during my trip below), are a brash reminder that it is definitely no longer safe to eat shellfish gathered from the flats.

An unfortunate sign of the times at the Maplewood Mudflats.

Personally, looking around at the waters in and around the flats, I wouldn’t really want to eat anything from this area these days either.

Green algae and detritus in the water column at Maplewood Flats

In my next post I explore some of the local colonial and industrial history that led to the state the flats are in today. Stay tuned…